Bowman ‘Star’ in the Canadian Arctic!

As summer turns in to fall and before the great Mackenzie River freezes over, several large barges are transported along the river’s icy waters. Once secured in position, they form an oil and gas exploration camp, which operates from October through to June each year and has done so for the past 12 years.

With the approach of winter, temperatures fall dramatically so that the barges are frozen fast into the ice-covered river. Due to its remote location, for the next 6 months the only way in or out of the camp is by helicopter, or ice roads constructed on top of the frozen river! 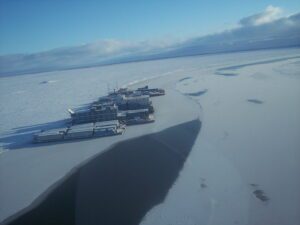 The barge facility is now home and base camp for Horizon Marine’s 88 person crew, who will work throughout the winter months in one of the most remote oil and gas exploration facilities on earth!

With seasonal temperatures ranging from -17°C to -40°C, the working days are long, extremely cold and very dark in this North Canadian winter wilderness.

Supporting life in these freezer-like conditions is the ‘Arctic Star’; the base camp barge where the crew retreat for warmth and light during those dark winter days and nights!

Heat and power are valuable, vital resources, without which, the crew would surely perish in this hostile environment.

To ensure there is adequate provision of both, Frontier Power Products were commissioned by Horizon to design and build a Combined Heat and Power (CHP) system to replace the previous two independent 400 kW gen-sets, which had no heat recovery system.

The solution proposed by Frontier used three 150 kW (270 hp) John Deere generating sets, arranged to operate in parallel, with automatic controls enabling the units to start up and shut down individually, to cater for the varying electrical demands of the camp. 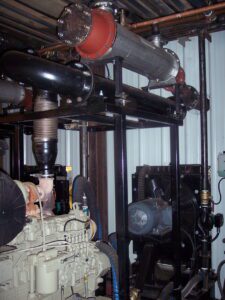 A heat recovery system was also required for the gen-sets’ engines and here, Frontier relied on Bowman’s technical expertise to provide the correct specification heat exchangers to harvest heat energy from the engines’ cooling and exhaust systems.

Heat that would normally be rejected from the cooling and exhaust systems is recovered by the Bowman units and then piped to and dispersed throughout the camp. The Bowman heat recovery solution has proved to be extremely reliable, as the original heat exchangers have now been in operation for around 25,000 hours, since installation 12 years ago. During that time, the ‘Artic Star’s’ fuel costs have reduced by around 33%, thanks to the addition of the heat recovery system. 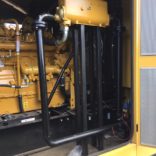 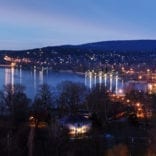