Is electric power the future for ferries?

Bowman marine heat exchangers have been specified to cool batteries and motors on state of the art electric ferries operating in Thailand.

Ferries are the perfect start point for the electrification of commercial boats. They make regular, repeat trips to pre-determined destinations, enabling operating times and recharging requirements to be precisely calculated and the appropriate infrastructure put in place.

They’re used throughout the world, so there’s no shortage of opportunities to develop innovative design solutions, to create vessels suited to specific local requirements; for example in areas where high demand and population density can lead to overcrowded waterways and unacceptably high levels of air pollution –  such as in South East Asia.

In Thailand, this situation is a major concern in the country’s capital, Bangkok. On the Chao Phraya River, traditional wooden ferries, usually powered by old, excessively large engines, emit high levels of pollution that contributes to a grey smog that frequently fills the air and chokes the lungs!

With an estimated 320 kilometres of waterways, Bangkok is often described as the ‘’Venice of the East’’, but with 10 million residents, plus 23 million annual visitors, demand for water travel is high, resulting in historic monuments, such as the Grand Place and the Temple of Dawn often being shrouded in this grey polluted atmosphere.

However, this is about to change, as a fleet of aluminium alloy electric ferries is under construction. Designed by one of South East Asia’s leaders in renewable energy, the company has developed a unique ferry, based on a catamaran design and has ambitious plans to build 42 vessels. 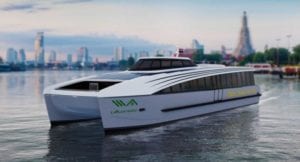 The result is expected to revolutionise water borne passenger transport in Bangkok. With a passenger capacity of 200, each 24 meter long ferry will be powered by two electric motors and have 26 lithium-ion battery packs, providing an 800 kW/h capacity, plus a range of up to 100 kilometres between re-charging. A maximum speed of 13 knots (15 mph) is planned, which is faster than most traditional ferries currently in use on the Chao Phraya River.

Rapid charging technology is being used and the company plans to install a network of dockside fast charging stations. Around just 15 minutes is required to re-charge the vessel, so by the time passenger transfer is complete, the ferry will be ready to disembark.

Cooling was a major consideration; the high local ambient air temperatures dictating that a proven, reliable cooling solution be adopted. After extensive research, the company selected Bowman heat exchangers, due to their experience cooling both electric and hybrid marine propulsion and charging systems.

Four Bowman GL400 marine specification heat exchangers were specified for the initial testing programme and upon successful completion of the trials, full production of the new catamaran was commenced, with the planned introduction of commercial services starting in 2020.  Early projections suggest the new ferry will double riverboat usage to over 60,000 passengers per day, with around 50% of all users choosing to travel on the new electric vessels.

And, having been successfully proven during the ferry’s sea trials, Bowman’s heat exchangers will again be at the heart of the electric propulsion system, providing an efficient cooling solution for the batteries and motors.

Bowman is now recognised as a world leader in cooling electric and hybrid propulsion systems, with many hundreds of heat exchangers operating reliably and efficiently worldwide. Many of the world’s leading manufacturers rely on Bowman heat exchangers to cool their electric drive systems, plus batteries and chargers. 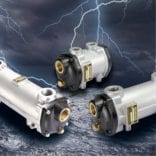