For the scientists living and working on The British Antarctic Survey’s Halley VI research station, reliable heat and power isn’t a luxury, it’s a matter of life and death.

Bowman heat exchangers are a key part of the CHP (Combined Heat and Power) system that provides the base with a constant and reliable energy supply, including all its heating, lighting, ventilation and power.

Halley VI is the first fully re-locatable research station in the world. Located on the Brunt Ice Shelf, this state-of-the-art facility comprises eight interlinked  ‘pods’ which sit on skis, via hydraulic legs which can be raised to overcome winter snow accumulation.

The station operates throughout the year with a maximum population of 70 in the summer and an average of 16 over winter when temperatures plunge to around – 50°C. An estimated fuel demand of 240,000L per year is required to keep the station operational and meeting this demand was critical in the design of the power system, as was reducing energy consumption and emissions.

Designed by Westac Power Ltd, the CHP system uses waste heat to warm the buildings and melt snow to provide hot water. Bowman heat exchangers capture the waste heat from the generators exhaust stream, which is used to heat water. This process allows the CHP unit to provide heating and hot water at no additional cost in terms of fuel usage or emissions to the environment.

The base was constructed alongside the previous station, Halley V, over four Antarctic summers, and then left during the winters, when conditions are too extreme to work. At the end of each winter the construction and engineering teams returned to test the equipment and power system at the frozen site. Despite enduring the most extreme conditions on the planet, the generators – incorporating the Bowman units – were able to start every time after the winter deep freeze.

The engineers also had to be confident that the power system and heat exchangers, would be operational and reliable before they could make the decision that it was safe to strip out and close down Halley V and thus rely on Halley VI. The station became operational on 28th Feb 2012 and officially opened on 5th February 2013 ready for the coming Antarctic winter. 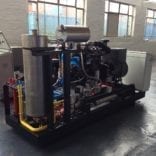 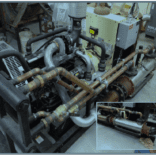