Spas and hot tubs are without doubt one of the most sought after guest facilities for holiday leisure destinations and this demand has led to a significant growth in their number year by year. For holiday parks looking to grow their business, accommodation offering individual guest hot tubs has long been seen as the way to increase residency rates and also extend the letting season.

How long does it take to heat a hot tub?

One of the major issues for park operators comes at guest change-over periods, where they are required to drain, clean, refill and re-heat their hot tubs within a window of often just 4 – 5 hours. The problem is that most hot tubs use electric heaters – many are just 3 kW output – raising water temperature by only 1-2 °C per hour. Even when pre-heated water (25 °C) is used to re-fill the tub, it can still take several hours to get the tub to full temperature, often meaning it’s not available, when new guests arrive.

The other problem is energy cost. With electricity being more than double the price of gas per kWh, it’s no surprise that hot tubs significantly increase energy costs, often by £500.00 + per tub, per annum. That’s a significant increase to the overheads and running costs of the park.

There is a simple solution that addresses both problems, which is based around using an external heat source, such as a gas, LPG or biomass boiler in conjunction with a Bowman heat exchanger. It provides a solution that heats hot tubs in a fraction of the time needed by electric heating and can also reduce energy costs significantly. The operation is similar to that of a swimming pool, in that there are two separate water circuits – the heating water circuit from the boiler and the spa water circuit – which are linked via the Bowman heat exchanger to facilitate heating the spa water. 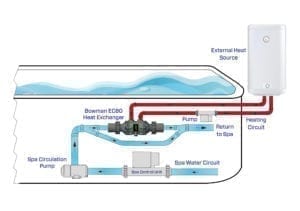 Here’s how it works

Hot water from the boiler (shown in red in the diagram) is pumped through the ‘outer shell’ of the heat exchanger and transfers its heat load to the spa water (shown in blue in the diagram) before returning back to the boiler to be re-heated. The spa water passes through the heat exchanger’s central ‘tube core’, absorbing heat from the boiler water and is then pumped in to the spa in a continuous cycle. The efficiency of the Bowman heat exchanger raises the spa water temperature by around 12 °C per hour, enabling a typical 1400-litre hot tub to be heated in around 2-3 hours, using ambient temperature water. However, if pre-heated water is used to re-fill, the tub can be heated up to full temperature in just an hour. And, as a bonus, by switching to a more economical external heat source, energy costs can be reduced, compared to electric heating.

The Bowman EC80 heat exchanger has proved to be extremely suitable for heating spas and hot tubs. Its compact dimensions enable it to be easily integrated into the hot tubs pipework, yet it offers up to 25 kW heat transfer capability and can raise spa water temperature by up 12 °C per hour.

Case study on the success of a heat exchanger installation at a popular holiday resort.

Download this leaflet to learn how you can achieve faster heat up times for your hot tub.

Fast and efficient heat transfer for heating domestic or commercial pools, plus spas and hot tubs.