Water left inside for prolonged periods can ruin a heat exchanger. Here we show how to eliminate the danger of stagnant water contamination.

Stagnant water – who needs it? It’s smelly and unsightly in fresh water ponds, but inside your heat exchanger, it’s potentially lethal!

The problem is, this ‘silent killer’ does its worst out of sight, so, unless you’re aware of the danger and take appropriate action, you may not even realise there’s a problem – until it’s too late!

However, there are some simple steps you can take to protect your heat exchanger; but first, let’s examine the cause of the problem.

Copper-nickel alloy (also referred to as ‘cupronickel’) is one of the primary materials used for the tube stack (or bundle) in a shell and tube heat exchanger. It’s extremely popular for marine cooling applications, as it provides excellent resistance to corrosive cooling media such as sea water, which is achieved by the formulation of a thin protective ‘film’ over the surface of the metal. This film starts to develop during the first few days of contact with ‘clean oxygenated sea water’, though it takes a further 3 months for it to fully develop. So, it’s extremely important that the copper-nickel tubes are only exposed to clean oxygenated sea water during this period, to ensure maximum corrosion resistance. 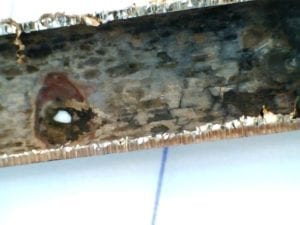 Problems can occur, if a cooling system undergoes commissioning and is then left for periods of time with the heat exchangers undrained, as it allows oxygenated sea water to ‘stagnate’ inside the tubes, creating ideal conditions for harmful bacteria to build up.

In many harbours and estuaries, anaerobic bacteria thrives in the sea water and in this high oxygen demand environment, sulphide ions, produced by sulphide generating bacteria are in abundance. This can be bad news for recently installed copper-nickel alloy, as unless the metal has gone through a full ‘conditioning’ process, using clean oxygenated water, it is highly likely the tubes’ internal protective oxide film will be much weaker, due to it being produced in the presence of sulphide contamination, and thus liable to create the conditions for accelerated corrosion.

However, it’s relatively straightforward to create a monitoring and maintenance regime for a new heat exchanger during the critical first three months of commissioning a cooling system and provided these steps are followed, the heat exchanger should operate at optimum efficiency over its normal life expectancy:

1: Ensure only ‘clean oxygenated sea water’ is used for cooling during the initial three months of operation to enable the full layer of protective ‘film’ to be built up on the internal tube surfaces.

2: Always drain down the sea water cooling circuit, if the boat is to be laid up for any extended periods of time.

3: After draining the sea water circuit, remove the heat exchanger* and flush through with either clean oxygenated sea water or fresh water – depending on what is readily available.

4: Carefully dry the heat exchanger before refitting* it back into the cooling circuit.

*If the end covers have been removed, always reassemble using new ‘O’ rings.

Whilst the points given above are considered ‘best practice’ for ensuring long, reliable operation of the heat exchanger, there are certain circumstances where stagnant water can’t be avoided. In these applications, Bowman recommend changing the tube stack material to titanium, which is an even more durable material, offering higher levels of corrosion resistance, together with a 10-year warranty.